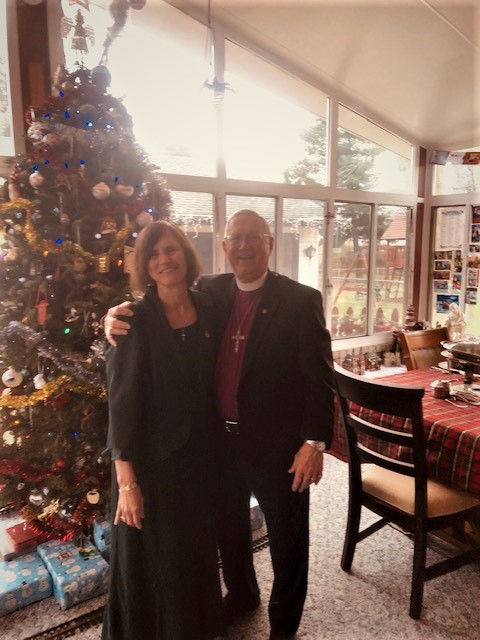 The Rev. Dr. David Stechholz, a fourth generation Lutheran Pastor, born near Buffalo, NY, in 1948, graduated from Valparaiso University with a B.A. in Political Science in 1970 and from American University in Washington, D.C. with an M.A. in International Relations and Foreign Policy in 1972.  He worked for the Environmental Protection Agency and as a Minister of Music at Lutheran Church of St. Andrew in Silver Spring, MD, before going to the Seminary in 1974.

He graduated from Concordia Theological Seminary (CTS), Fort Wayne, IN in 1978 with a M. Div.  He served as Pastor in parishes in Oakmont, PA (English Evangelical Lutheran Church of Our Redeemer, 1978-1988), Danville, CA (Messiah Lutheran Church, 1988-1991), and San Francisco, CA (West Portal Evangelical Lutheran Church & School, 1991-2006), before becoming Bishop and President of the English District (headquartered in Farmington [Detroit], MI).  “Bishop” Stechholz” completed most of his doctoral course-work at Duquesne University of the Holy Ghost, Pittsburgh, PA, as well as additional coursework from CTS.  He was given the English District’s Honorary Doctor of Divinity award in 2008 and served the maximum number of term-limited years before retiring in September, 2015.  Concordia University-Ann Arbor, MI (CUAA) awarded him another honorary Doctor of Divinity in May, 2015.  He currently serves as Archdeacon at Zion Evangelical-Lutheran Church, Detroit, MI (English District).

David Stechholz and Janet (nee Kaminske), a graduate of both CUAA and CUC at River Forest, IL, have been married over 40 years.  They have been blessed with three wonderful, deeply-committed Christian children: Andrew, who lives with them and is handicapped but employed, Mary (husband, Joseph) Bliss of New Lenox, IL, and Sarah (husband, A.J.) Phillips of Salt Lake City, UT.  Mary and Sarah are Lutheran school teachers like their Mom.  David and Janet have three grandchildren, Mia, Logan, and Kara Bliss.

While Bishop, he served on the prior Board of Regents and Michigan Committee of Overseers of CUAA, working to promote CUAA and CCA (Concordia College Alabama, Selma, AL) throughout the Synod, Canada and the United States.  In retirement, he travels much less but did provide Concordia Sundays for CUAA & CCA, did hospital and shut-in visitation for Grace Lutheran Church, Redford Twp., MI (2015-2016).  He and his wife Janet sang in the Choir, and he headed up the Outreach & Missions Committee, worked with the Board of Elders, and gave pastoral assistance while holding membership at Angelica Evangelical Lutheran Church, Allen Park, MI (2015-2018). He is President (2018-2019) and on the Board of Directors of the Livonia Rotary Club. He sings, along with Janet & Andrew, in the Livonia Civic Chorus.

Besides being a voracious reader and author of the December Portals of Prayer devotions, he enjoys gardening, walks with his wife, travel, sports, and tutoring a couple public school children in reading each year through Rotary.  He and Janet co-hosted an 11-Day “Reformation-Luther Sites” Tour to Germany in the Summer of 2017. He is temporarily serving part-time as Vacancy Pastor for St. Matthew Evangelical Lutheran Church & School, Westland, MI.