Romans 3:21-28
The Festival of the Reformation, 2015 A. D.
In the Name of the Father, and of the  Son, and of the Holy Ghost.
One might wish that our Fathers in the faith had selected the sixth verse of Revelation 14 as the appointed Epistle for the Festival of the Reformation. It is there that St. John records “I saw another angel flying in the midst of heaven, having the everlasting gospel to preach to those who dwell on the earth-- to every nation, tribe, tongue, and people…”

Many of our Fathers in the faith, including Luther’s Pastor and C.F.W. Walther, founder of the Missouri Synod, have seen in those Divine Words given to St. John a picture of Martin Luther, who in the face of excommunication and the threat of death continued to cling to Scripture alone, to publicly preach and teach and confess and write not the dictates of Pope or emperor, but only the pure Word of God, the Holy Saving Gospel.

So it was at the Diet of Worms, on April 2, the Year of Our Lord 1521, that Luther was ordered to recant his writings and submit to the teachings of the medieval Romish church. It was there that Luther boldly confessed "Unless I am convinced by Scripture and plain reason - I do not accept the authority of the popes and councils, for they have contradicted each other - my conscience is captive to the Word of God. I cannot and I will not recant anything for to go against conscience is neither right nor safe. God help me. Amen." It is reputed that at that point, planted firmly next to his writings, Luther declared “Here I stand, I can do no other.” It was only three and a half years earlier, on this day in the Year of Our Lord 1517, that Dr. Luther nailed his “95 Theses” to the door of the Castle Church in Wittenberg, seeking a theological debate on the Pope’s system of “indulgences”, and bringing the question of what a man must do to be saved to the forefront. So it would be attractive to read from the Apocalypse and romanticize about the boldness and courage and the piety and genius of Luther; to recall his consuming concern for doctrinal purity and the souls of the saints, to remember his willingness to die for the true faith; and to feel just a little pride that we follow in his footsteps, and to boast that we continue what he started. But that would be to do exactly what Luther taught against. To place our trust in a man, even in Luther, would be to return to monastic and popish practices. It would be wrong, and our Fathers in the faith knew better. They left us not Revelation 14, but rather Romans 3 as the Epistle for today. And thanks be to God that they did. For the Reformation isn’t about Martin Luther. Indeed, the God of Grace worked mightily through him to restore pure preaching and teaching and the Holy Sacraments to His Church, for the life of the world. He preached Christ. But Reformation isn’t about Luther any more than Christmas is about St. Luke or Easter is about St. John. St. Martin, St. Luke, and St. John all pointed to Christ. They preached Christ and Him crucified and risen for your salvation. The Reformation is about Jesus Christ, your Savior, to whom the angels submit, whom the angels worship, and who is the substance of the everlasting Gospel. The Reformation is about what Christ has done for you, and what He freely gives you. That you, lost in your transgressions and dead in your sins, you who are wont to trust in men and the works of men, you who by nature trust in yourself, that you might be saved, Christ suffered, and died,

Romans 3:21-28
The Festival of the Reformation, 2015 A. D.
and rose again, that simply by believing in Him your receive forgiveness and life – “not by
works, lest any man boast.”

For there is no difference, for all have sinned and fall short of the glory of God, being justified

freely by His grace through the redemption that is in Christ Jesus.”

That is what we celebrate this day, and every day: Christ, and His boundless mercy, grace and
love; His mercy towards you, His grace upon you, His love for you, Christ for you. Christ for
you at the greatest of costs: the life of the Son of God; but Christ for you as a free gift, by God’s
grace through faith in Him.

For it is not by Tetzel’s money chest, but by the Baptismal font, that souls are added to heaven.
And it is not by Papal indulgence or oblation or relic or monstrance or eleemosynary act or
monastic work, but rather by the Blood of Christ, that your soul is purchased and won.

And it is not by allegiance and obedience to Pope or emperor or Bishop or Synodical President
or human Pastor that you become God’s child, but by God’s grace through faith alone, faith in
Jesus Christ, and that faith a free Gift of God, poured out upon the undeserving and the
unworthy, poured out upon fallen men that sinners be declared saints. And it is not by elaborate
confession and works of penance, but rather by contrition and faith that you receive the
forgiveness of all your sins. It is not about men. It is about the God-Man Jesus Christ.

And it is He, Christ your Lord, Christ your Great High Priest, Christ the Lamb of God, that bids
you kneel this day before this altar and eat His Body, given for you. It is He that on the cross
filled the Chalice, the Cup of the New Testament in His Blood, that you drink of it this day.
In His great love for you, the Lord of the Church worked mightily through our Fathers in the
faith, through Martin Luther and the Reformers that preceded and followed him. But like the
Prophets and Evangelists and Apostles of old, they pointed not to themselves, but to Christ.
They pointed to Christ so that you would look to Him, that your conscience be captive to the
Word of God, that you believe in Christ the Lord and cling to Him, for strength in this life, and
for the blessed hope of the life to come.

Sola Gratia, Sola Fide, Sola Scriptura, Solus Christus, Soli Deo Gloria
In the Name of the Father, and of the  Son, and of the Holy Ghost. 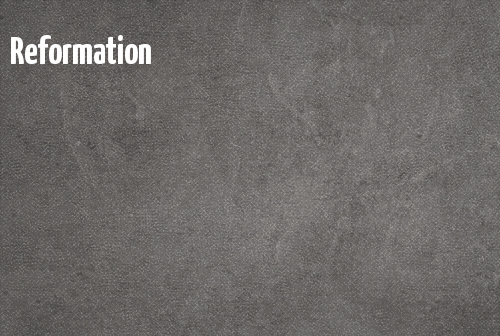